Welcome James to Author Interview Friday. Your story is an interesting one and I am going to let you tell it without my interruptions. Take it away James.

I’m probably going to sound like some weird nut case but I had this story in my head for many years. When I retired, I finally had some time and decided to try to write it. It ended up with over a million characters and I had to trim, trim, trim. The characters took over early on and all I did was write down what they dictated. I found my self laughing with them, crying with them and actually arguing with them. I would often say (out loud) I can’t get you out of this or that situation but low and behold they could, … and did.

My first writing endeavor began as a graphic adult love story with a science fiction twist (The Waters Series – 2 books). That was followed  by to science fiction that developed into four books (Tra$h Man Series). Then a change of genre, to a humorous memoir of my time in the US Air Force as a photographer (Helluva Ride), to a fictional religion based book dealing with the second coming of a messiah, a woman this time. (The Perfect Daughter)
I am a lousy self marketer of my works. I chose to self publish because I don’t have to answer to anyone and write the kind of stories I like to read. They don’t fit to formula writing and if no one reads them, that’s okay. I’m just not concerned with selling books. I believe I’m a “author” not a writer. Writers write to earn a living and authors write in hopes of being read.
Without a doubt, for me the editing process is the most difficult. Luckily I have several very intelligent friends and the Pine Island Writers group that provided constructive criticism. I’m terrible at grammar and if it were not for computers and spell check writing would be impossible for me. Sorry to say that I don’t follow an outline. I tried to, but with my writing style of letting the characters go their own way, following an outline doesn’t work for me. My characters play in a similar manner to life itself, where despite the best of plans, what the next day brings is often a roll of the dice.
I am probably be the last person to answer any questions about writing as a career. If it’s for your own feeling of self worth then write what comes calling and let it flow. Let your story tell itself and don’t worry about things that are “cleaned up” later in editing. 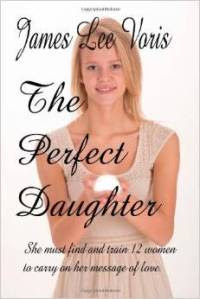 The title of my book is “The Perfect Daughter” You can get it on Amazon at the link below. Briefly, it is a strange twisting chain of events collimating in the second coming of the next Messiah, a woman this time. The product of an immaculate conception virgin birth, Christine brings a message of love and hope for humanity. Her mission is to find and train twelve women to carry on her message as she explores her own human side. (It’s kinda the story I think most people would like to know about Christ and his human side.)
http://www.amazon.com/The-Perfect-Daughter-James-Voris/dp/1491015128/
Here are excerpts from my book.
(Character talking with God.) Why don’t you show yourself to me? I’d feel less afraid if I could see you.”
“In all the religions of all the worlds throughout the universe, I made my creations with free will first, and secondly, I gave them an awareness of me. Please, understand this wasn’t so they would worship me. I am not vain. I neither need nor want the whole of creation falling on their faces at altars to sing my praises, or pray to me morning, noon and night ad infinitum. Certainly I never, ever, want sacrifices to me. I would never ask that of my children. The only reason I want my creation to know of me is so they know love, forgiveness, trust, and kindness. I greatest desire is for the whole of my creation to celebrate that. But nearly everywhere across the universe, where their writings proclaim me as their only God, I am assumed of have make them in my image. They often presume that I demand the blood of anyone that doesn’t believe in the religious cultures teachings in this country or that. The same as it is here on your world.”
“Then, …” I asked clearing my throat and with a little fear in my voice, “ ahhmm … what do you really look like?”
(Sara’s – [To be Christine’s mother] early introduction into story)
So, this young woman, who had everything; brains, beauty, talent, and in the prime of her life only months from obtaining her PhD – was lying on the highway amid the cataclysm.
Each heartbeat spurt from the gaping wound in her neck lessened her chance for continuing life.
First, she was aware of the tumult, a cacophony of sounds, … sirens screeching, men and women screaming, people running, the deep, heavy rumble, crashing sounds of heavy things breaking and the ground shaking under her. Then the sounds of shattering glass and dogs howling, but it was the screaming and running that frightened her most.
Then she was aware of acrid, black rubber and tar-burning smoke that seared her lungs, stung her eyes and burned her throat.
Dazed, she rose up on one arm to look through the fog in her mind. The caustic smoke, bedlam and carnage all about her overwhelmed her senses as she tried to understand what was happening. Looking at the ground through a fuzzy haze, she was aware of blood splattering, and the thought flashed through her mind….‘who’s getting blood all over my new, beautiful, yellow, dress, … I’ll have a devil of a time getting that stain out. Who’s doing that, … stop it!’ The blur increased as she grew weaker. The sudden realization struck her that she was the source of the blood. She began to cry as she slumped forward. It grew darker and she felt sick as the chill overcame her.
(First meeting with 25 of the top world religious leaders  to show the proof of the divine miracle of virgin birth.)
By the time they entered the vault room Keith had another lighting pack set up. There were twenty-five cases stacked. There were also comfortable chairs for those gathered to sit in. Robert stepped forward at this point and addressed the group. “This ‘proof’, is by far the most unbelievable of all. I’m a medical doctor and I had doubts, even though it was my own daughter, so rather than bore you with my story I’ll just show you the proof.” Robert gave a visual presentation of every record, the entire CT scans, Sonograms, MRIs, DNA evidence, detailing everything he had discovered. He had Sara and Victor tell their story in their own words of what they experienced. At the conclusion he wrapped it up with the statement. “I can’t offer you more proof than this. I’m giving you all the material I have, every scrap of paper, every note, memo, thought. I have to let you now decide what to do with it.”
Thank you James. It has been a pleasure having you on Author Interview Friday.